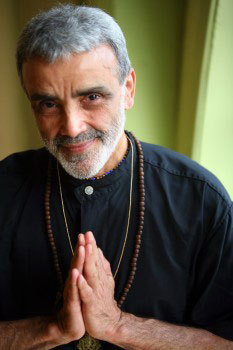 I don’t remember the first time I saw the photo of the man doing a headstand outside on a street. It was sometime a very long time ago. But I knew it was important…

For several years after becoming a yoga teacher, I felt I needed more. I read a lot of books, but it was time. I don’t remember suddenly becoming aware of Dharma Mittra, I had been to New York City for a wedding and just walked into his studio after seeing a sign on the building.  He was not there, away for a conference. I knew then that I would return. The energy of this place felt somehow familiar.

And so for a couple of years I taught yoga. I taught a lot of yoga. I opened my own studio and started a Teacher Training program. In my classes as well as the teaching I did, I often told the story of how I was the daughter of a fish biologist, and that I had grown up in a lab watching these schools of fish swim in big tanks, together, as one. I likened it to moving together in a Vinyasa class, that we should try to stay together until encourage to flow on their own, when they could add their own things in, and that we would come back together again.

Around that same time, I told a small group of teachers in training that we should road trip to New York City to take some classes with the legendary Sri Dharma Mittra, and off we went, to a Maha Sadhana as well as all of the classes we could possibly take from him for the weekend, which were quite a few! My classes with him were magical. And then during one of the classes, he said so quietly, “move together, like a school of fish…” tears streamed down my face and I knew that I was for certain to come back for training.

So off I went, in the late summer of 2015 to take the Life Of A Yogi 500 hour teacher training. And it was every bit and more of the experience that I had ever hoped it would be. To know Dharma is to love Dharma. So many of my life-long questions finally answered. The missing link for me between me and the divine, between me and myself!