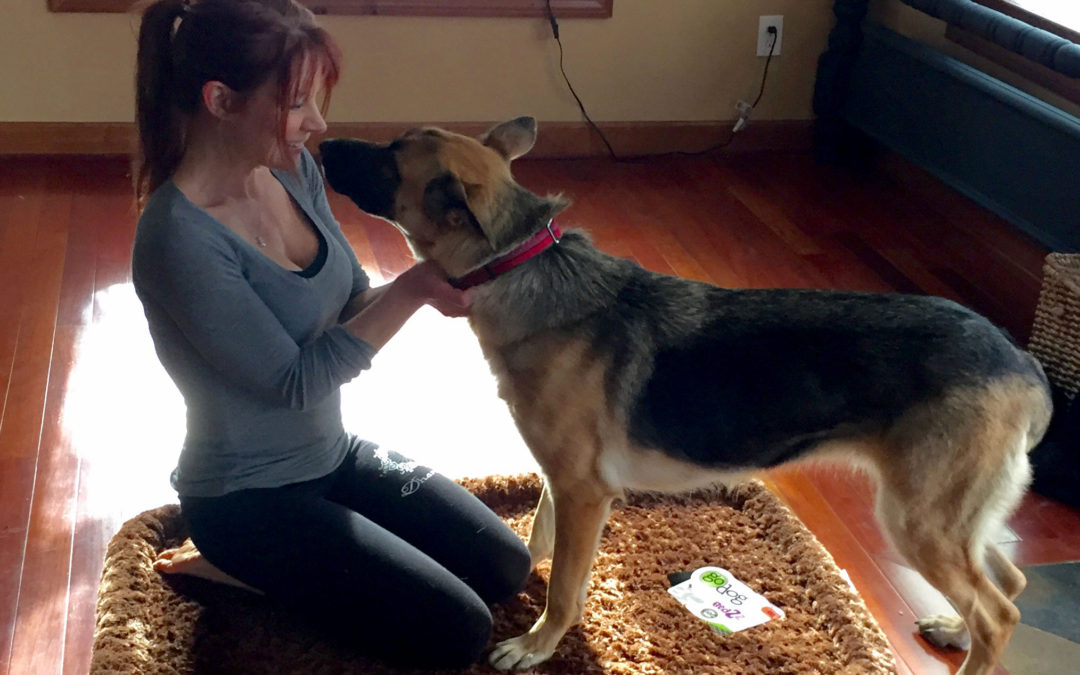 In January, my children and I decided it was time to get a dog. I started looking at all of the local rescues. I didn’t really know what kind of dog I was looking for, I thought a small dog might be nice. One evening in particular, I was surfing the Almost Home Animal Rescue’s site and up popped this very sweet looking German Shepard named “Roxy.” There was just something about her face! My kids and I went the next day to meet her, she was a tall but very thin and sweet, young girl. I filled out all of the paper work and waited for a call, trying not to get my hopes up as they told me there were a lot of applications for this dog.

Two days later I got an email that said they thought we would be a good match and that I had to come in as soon as possible to adopt her, so off we went! And just like that, Roxy became a very large part of our lives.

But before everything fell into place, the rescue, as well as the vet said, yes, you should keep her in a crate while you are away, she is still a puppy. Until you get to know her and she you. Then you know your house is safe and so is she. So I bought a large crate. And she seemed to love it. So on the first day I had to go to teach, I left her in the crate, I came home and she had gotten out of it. (I am only gone a couple hours at a time). There it stood, the door wide open. I was puzzled, and then a little upset that my favorite pair of shoes were chewed up. I didn’t understand how that could be. When my son came from school, he suggested that I hadn’t “locked” the crate. Well he was right, a special metal lock at the top. So on the second day, in she went and off I went. And when I came home, she had gotten out again! The bottom of the cage was bent and she had gotten through somehow. More things chewed up. I called the vet and they suggested using zip ties. I had those. So before I left on the third day, I zipped it up tight. And she got out again, the zip ties chewed through and some even stripped off!  The hashtag Houdini dog came to mind… Exasperated, I called the rescue. I was worried about all of the things she was chewing up. One last hope to use padlocks to keep her in and everything safe, including her! What you say??? Padlocks?? You locked your dog in a crate with padlocks?? Hmmmm… before you judge me, I have a secret…

90 degrees to her left, the cage has an identical door. Never even locked. She is just unaware of its existence! And we humans can learn from this! There are invisible doors all around us! How often in our lives have we tried so hard to make something work when all we needed to do is try it a different way, walk through a different door? It’s easy to get caught up in thinking something will eventually work if we try hard enough. (As it did for Roxy) Sometimes it does, but sometimes we are not meant for that door. Fear can hold us back. Sometimes we stay some place even though we are miserable simply because it’s familiar, even though we are not happy. This is how we get stuck. And getting stuck can last for a long time.

I encourage you all to take note of what is working in your life, and what isn’t! Be open to trying a new door! Use your yoga practice to connect to the Divine inside of you, gently guiding you.

Love to you all, Cinda